They’re just trying to essentially leverage and hijack somebody else’s idea and see if they can extort some money out of them.

Unfortunately, some patent troll defenders responded with a personal attack on the President as doing the bidding of a large companies.  Specifically, Intellectual Asset Magazine (IAM) took to Twitter to argue:

Big companies with self-centred agendas, combined with questionable research, are not ideal bases from which to build an attack on “trolls”.

IAM describes itself as, “a bi-monthly magazine and online service that treats IP as a business asset and tool rather than simply as a legal right”.  IAM views IP not as something to promote innovation, but rather as something you use to make money, others be damned.  They are supporters and frequent defenders of Patent Assertion Entities (PAEs).  Daniel O’Connor previously posted on IAM shenanigans at DisCo Project.

I find IAM’s attack on the President as protecting “big-companies with self-centered agendas” to be entirely baseless and devoid of fact, so much so that I thought it important to dedicate a whole blog post in response.

First, consider the case of Innovatio.  Innovatio is a patent troll claiming anyone who dared to have a Cisco, Netgear or Motorola WiFi router was violating its patents.  It didn’t just sue or send threatening letters to those large companies; instead, it focused its attention in on restaurants, supermarkets and hotels.  This includes individual outposts of large national brands, some of which are franchised small local-owned businesses.  It has even threatened to potentially sue individual homeowners.  Yet IAM downplays actions like Innovatio’s in attacking the President as protecting “big companies with self-centered agendas” according to IAM.

Is that not enough?  How about Personal Audio, another patent troll that is claiming anyone who is podcasting is violating its patents.  Personal Audio is a PAE with empty offices in the infamous Eastern District of Texas.  Their strategy is to sue individuals, sometimes high profile, including comedian Adam Carolla.  Personal Audio has also demanded licenses from political commentator Sam Seder.  President Obama’s efforts to protect these individual podcasters is not doing the bidding of a few large companies.

Another small company to fall prey to patent troll suits is Internet travel smartphone application and website Hipmunk.  Small IT services firms have been targeted for using scanners. Venture capitalists like Brad Feld and Brad Burnham regularly tell stories about investments they have made in companies that have been targeted at an early stage by patent trolls.  Even cities like Portland, OR and Cleveland, OH have been targeted by PAEs.

Take this email Feld received back in August of 2012:

My startup, all five employees and $0 revenue, is being sued by a patent troll. It is madness.

Almost a third of our portfolio is under attack by patent trolls. Is it possible that one third of the engineering teams in our portfolio unethically misappropriated technology from someone else and then made that the basis of their web services? No!

Burnham tells the story of an avatar technology startup he invested in that was put out of business by PAEs.  The patents the PAE acquired to attack and ultimately destroy Burnham’s Internet avatar investment dealt with placing mailed-in photographs onto bodies on a VHS tape.  While Burnham tells this story, many startups decline to talk on-the-record, out of fear of becoming an even bigger target.  They will talk your ear off off-the-record, but that is it.

Concrete data backs up these anecdotes.  Professor Colleen Chien has done some groundbreaking research on the effects patent trolls are having on startups.  In her research, she found 47 companies with revenues of under $10M a year who responded to her survey, of which over 51% reported having significant operational impact on their business.  It was the 12 companies with revenues over $100 million that reported they did not have a significant operational impact.  This chart she created outlines her research: 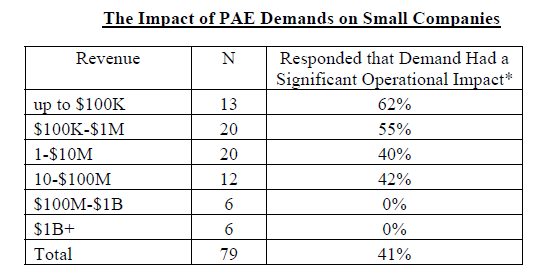 IAM certainly has an interest in being a publication and community for people who like to exploit the patent system as it stands — mostly patent lawyers and patent owners.  Patent Progress, in contrast, is dedicated to fixing this broken system.  We applaud President Obama for announcing last week he will stand up for startups, small business, job creators and the public interest in fighting back against patent trolls.