Whereas the number of patents granted increased at less than 1 percent per year from 1930 until 1982, in the two decades after the creation of the Federal Circuit patent grants nearly tripled, growing at an annual rate of about 5.7 percent.  Portfolios in IT grew in size and abundance.  At the 2002 FTC/DOJ hearings, the patent counsel for Texas Instruments, one of the world’s most sophisticated patent licensors, described the challenge of determining what was in its own portfolio as a “mind-boggling, budget-busting exercise.”  In 2002, the company had 8,000 U.S. patents.  As of 2011, the size of its patent portfolio had nearly doubled.

If one of the world’s most sophisticated patent operations cannot reasonably make sense of its own patent portfolio, how can any company — especially a small company — make sense of the patents owned by everyone else.  Just as “most of the smart people in the room work for someone else,” most of the patents belong to someone else.  Moreover, the problem is not just identifying who owns the patents, but also interpreting what they cover and assessing validity in areas where patent quality is low and patent-invalidating prior art may be found by those willing and able to bear the expense.  However, since the great majority of patents will never be asserted, it makes little sense to spend vast sums avoiding all patents as a precautionary measure.

These problems have grown worse over the years.  As the National Science Foundation (NSF) charts below show, information and communications technology (ICT) patents doubled between 1995 and 2008, whereas the number of patents in other advanced technologies remained much the same, or even declined:

Meanwhile the issuance of software patents has quadrupled over the same period (Bessen 2011): 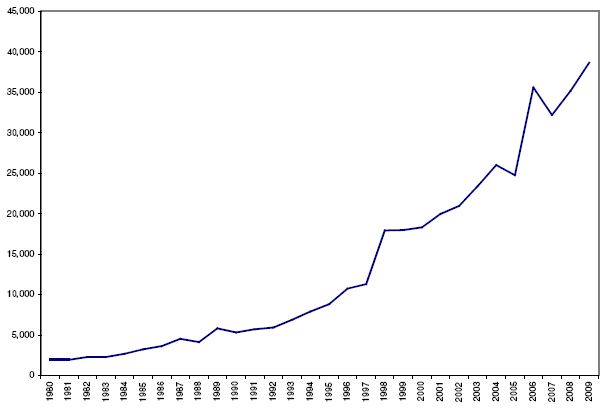 RPX estimates that there are 250,000 active U.S. patents applicable to the smartphone.  Assuming that smartphone patents have an average of 20 claims each, that is 5,000,000 restrictions on smartphone innovation.  Researchers calculated that it would take roughly 2,000,000 patent attorneys working full-time to compare every software-producing firm’s products with every software patent issued in a given year.  Moreover, any such search would be incomplete, because it cannot reveal applications that are not yet published (18 months from filing in most cases), let alone those that have not yet been filed.

The vast number of patents and applications create a “thicket” that puts producing companies in a quandary.  Searching patents is prohibitively costly and inconclusive, yet the risks of inadvertent infringement are substantial, including injunction, disproportionate damages or an order barring importation from the International Trade Commission.  On the other hand, even if a problem patent is identified, the odds are very good, if it is asserted, that prior art can be found that limits the validity or scope of patent.  No large company wants to develop a reputation as an easy target — and so it will spend generously on legal defense to ensure that this does not happen.

ICT and software producers have developed ways of dealing with the proliferation of patents.  They cross-license their portfolios with each other.  Or they enter into non-assertion agreements, in which they agree not to sue each other.  More informally, they restrain themselves for fear of mutually assured destruction.  However, these understandings are ineffective against trolls who, unlike producing companies, have nothing to lose and everything to gain from patent litigation.  Moreover, the implicit truce due to mutually assured destruction appears to have broken down.